In Search of Treasure at Sea!

In the search for old treasures you may have Indiana Jones in mind, struggling with baddies, crawling through caves, seeking out the Holy Grail. Well, our second article is no Holy Grail although it is a chalice used at the Eucharist! 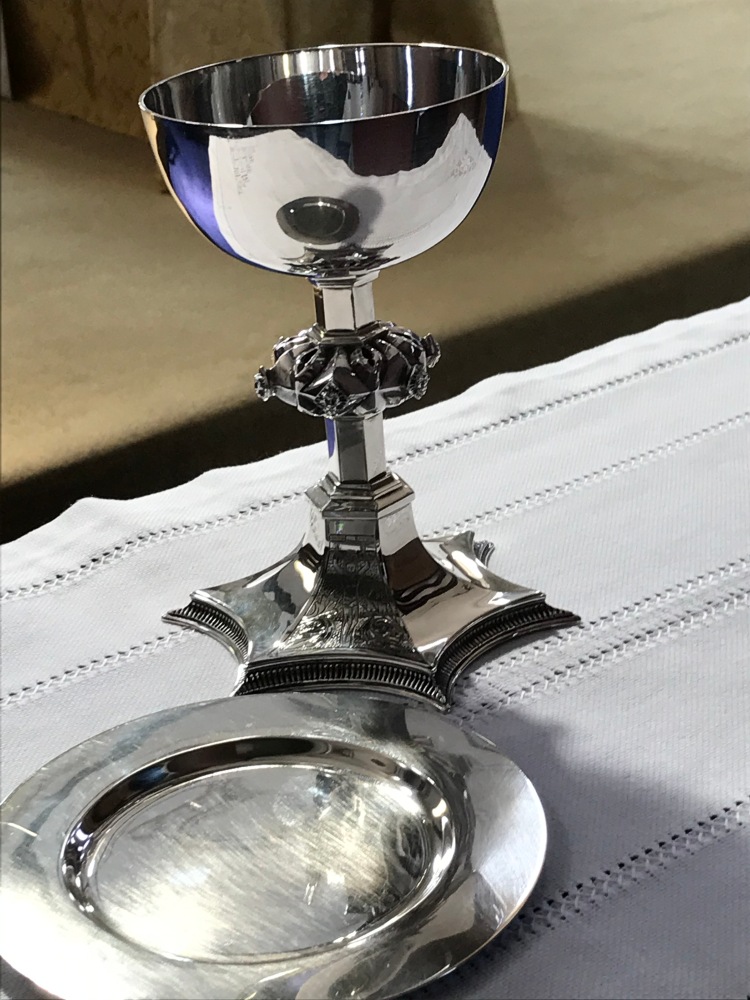 It’s not the most decorated chalice amongst the collection here. It has little embellishment other than a simple crucifixion scene at its foot and, six small, decorative faces at the neck but it has a story to tell. 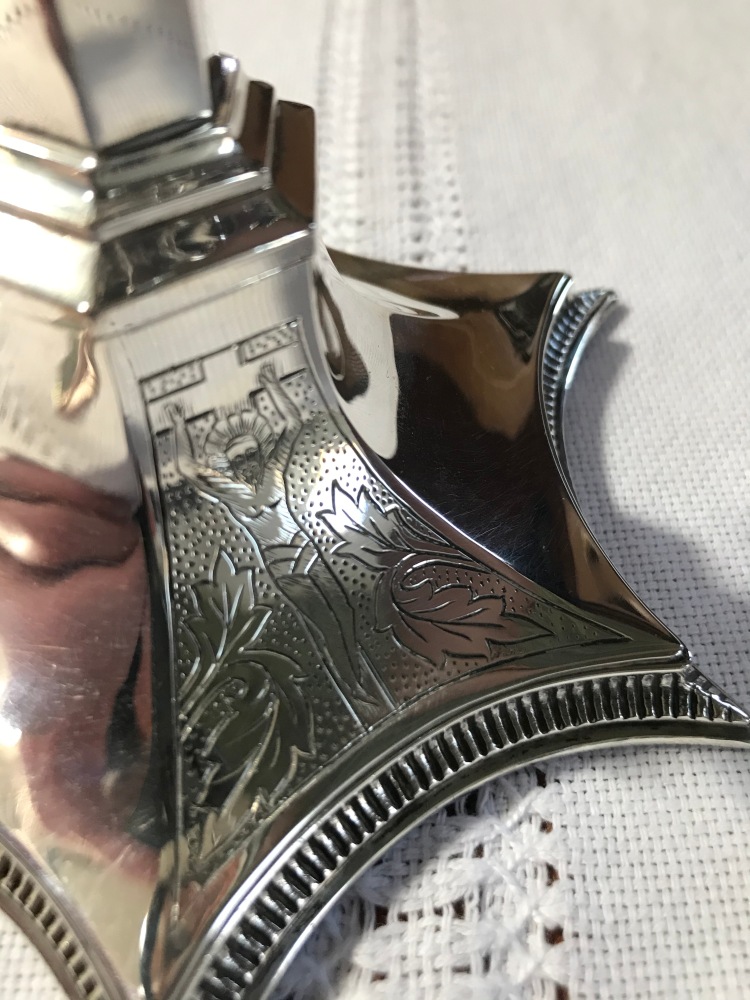 The chalice came from the Mission to Seafarers Centre, The Flying Angel, which closed in Cardiff Docks a decade ago. At its closure, various items from the chapel ended up at St Mary’s, including this chalice which was given for safe keeping to Fr Francis, the parish priest and honorary chaplain. Later, it was chosen by him as the chalice to be placed upon his coffin during his Funeral Mass.

So this simple chalice has links to the sea and begins to pour out a history of the seafaring past and present of Cardiff.

Pushed out to sea

In the nineteenth century, Cardiff began to boom. In 1820, approximately 85,000 tons of coal were shipped from the shores of Cardiff. Twenty years later, as the docks expanded, the figure had risen to 211,000 tons exported in 2,500 vessels. This peak came in 1913 with 10.7 million tons of coal pushed out to sea, and in 1920 there were 122 shipping companies.

As well as exports, there were imports too, and accompanying the many products from afar were sailors who came and went but many stayed, feeling quite at home in Cardiff.

With both a shifting, transitory population and a new, more stable community being created there was much work to do and many pressing needs. There was poverty, hardship uncertainty of work and many other social and personal problems.

A colourful glimpse of life at the time and some of the challenges involved is given in the biography of a former parish priest, Fr Jones of Cardiff (1906) where the authors, who served as his curates, write:

“If you turn aside to the right you find a network of mean streets, or, turning to the left and passing through a desert of railways to a fringe of houses upon the edge of the docks, you find yourself in the midst of a scene of squalor hardly to be matched in the East-end of London.”

“Innumerable children, unkempt and dirty, are playing in the filthy roadway, from which the sun causes a fetid smell to rise; groups of slatternly women, one in three bearing a black eye, loaf upon the pavement; now and then a loud-voiced harridan darts from one of the dirty entries to pour forth a volley of abusive threats against some person or persons unknown.

And the listless men, some of them obviously mere hangers-on of a port and sodden with drink; while others, as the stains about their feet show, are dock labourers, or “hobblers,” who cannot find a job, are a sight, if possible, more depressing than the women.

The whole of the maritime community and of that society which lives upon it supplies a field in which missionaries of every Church and every sect may labour and do labour continuously without fear that their work can come to an end.”

With such an endless amount of work to do, three ships were mustered to minister to the seafaring population. Stranded near the Docks was the Hamadryad used as a hospital for sailors. The Havannah was used as an industrial ship for boys who attended the service on Sundays at St. Mary’s, and many of them were Confirmed after receiving instruction by one of the priests who held classes on board. The Thisbe, afloat in the Bute Dock, was used from 1863 as a Seamen’s Chapel and Institute with a resident chaplain. Regular church services were held as well as magic lantern shows and concerts. A more permanent Church and Institute was built in 1892 in the West Dock.

The Chaplains of the Missions to Seamen’s Society held a curate’s licence under the Vicar of S. Mary’s, all of whom looked after the spiritual and social welfare of the sailors. The Rev. R. J. Phillips who was Chaplain from 1880 to 1885 wrote of his working relationship with the vicar, Fr Jones:

“One of the first visitors we received on board of the old mission ship (H.M.S. Thisbe) was the Vicar … how cheered and encouraged I was by his sympathy and kindness.

I remember going up the side of the East Dock one day and seeing the Vicar on his hands and knees in the coal dust helping a poor sailor replace his clothes, etc., which had been flung out and emptied on to the quay by a Board of Trade man who fancied that Jack had some cigars and plugs of tobacco which had not paid duty.

The Vicar’s kindness and good nature I feel sure prevented the officer from being roughly handled, as great indignation was expressed at the time by some seamen who witnessed the scene.”

There are other remnants of life at sea here are at St Mary’s including a stained glass window in memory of those Merchant Seafarers who lost their lives during the Russian Convoys of World War II, along with the Standard of the Cardiff Branch Russian Convoy Club which was placed ere when the club closed in 2008.

Each year, in Cardiff Bay, there are two Memorial Services in Cardiff organised by the Merchant Navy Association, and a framed list of the names of Merchant Seafarers who died during war can be seen at the Butetown Community Centre (see below). 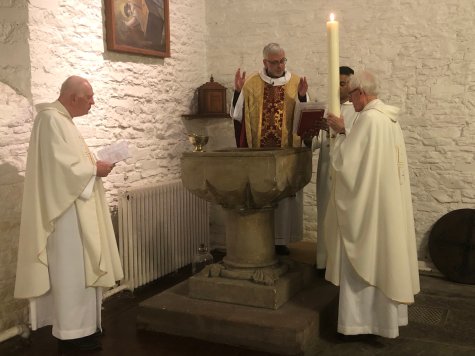 Anchored in the Sea

In more recent times, a rood cross was carved in the shape of an Anchor, hung high above the nave altar with the figures of Jesus, Mary and the Beloved Disciple taken from the chancel screen from the redundant St St Dyfrig’s Church which once stood near Central Railway Station. The cross is often something to which tourists and visitors are attracted and begins a discussion of St Mary’s seafaring past.

Although the Flying Angel Centre has now gone, Cardiff still has a working docks albeit a shadow of its former days. It’s here that often unseen visitors from afar touch the edge of Cardiff. They continue to receive the ministry of a Mission to Seafarers Chaplain.

Today, The Mission to Seafarers is one of the largest port-based welfare operators in the world, present in around 200 ports across 50 countries, and providing help and support to the 1.5 million men and women who face danger every day to keep our global economy afloat.

So, let’s raise a glass to them!