The fourth item is a simple letter, written in scribbled handwriting, sent to the Vicar at the time, Fr Griffith Arthur Jones, from the Revd J.W. Doran. Together, they were working on a Gregorian Psalter in Welsh, indicated from the outset by the way the letter is dated: “Feast of the dear Patron S. Gregory the Great, Pope and Confessor and Doctor, transferred from yesterday, 1882.

“My dear Jones,” he says in his greeting, “After the above elaborate dating, (not a usual style with me, but suggested by the labours that we have in hand,) let me begin.

In 1891, 15% of Butetown’s population could speak Welsh, significantly higher than the Cardiff average. Some parts had a particularly high percentage, like Loudon Square and James Street. Serving this community were three Welsh-language chapels: Bethania Calvinistic Methodist (1853) in Loudon Square, and Siloam Baptist (1860) and Mount Stuart Congregationalist Church (1858) both in Mount Stuart Square.

Also opened in 1856 was a Welsh-speaking Anglican church on Tyndall Street in an area of the parish called Newtown.  All Saints’ Church or, more appropriately, Eglwys yr Holl Sant, was built thanks to the Marquess of Bute and his wife who between them provided the capital for the land and its building.

However, by 1870, Welsh-language services had been squeezed out by the largely Irish population of Newtown.  For Fr Jones, a Welsh speaker himself and the recipient of the letter, there was an important task ahead.

A scandal to have lost

He arrived as Vicar in 1872, and some time after, in a copy of the Parish Magazine, we read: “It now remains for the Welsh Churchmen of Cardiff to aid the Vicar in his endeavours to restore, what it is a scandal to Cardiff to have lost, Welsh Services for the Church of the most important town in Wales.”

Fr Jones had already written a number of Welsh publications by the time he arrived at St Mary’s. In 1854, he had been busy translating a Welsh Psalter with Rev. C. W. Heaton (his successor at St Mary’s) and the Rev. Lewis Gilbertson, entitled Y Psallwyr neu Psalmau Dafydd wedi eu nodi au haddasu i’s Tonau Cyntefig.

Other publications and pamphlets were also generated including a Manual on Confirmation and a Handbook of Teaching, Devotion and Christian Practice, Y Primer Bach (1870) as well as a booklet on the Athanasian Creed.

Shortly after he arrived at St Mary’s, he set about a Welsh Mission which realised a significant amount of success. “It is hoped Welsh Services will soon be permanently held in S. Mary’s Parish as a result of the Welsh Mission,” continued the magazine article. A Welsh Sunday School was established at Bute Terrace Schools in the afternoon, and the Vicar began to celebrate Holy Communion in Welsh on the first Sunday in the month, “there having been quite a sufficient number of Communicants at the Welsh Celebration during the Mission to make such a service most desirable.”

It was this Welsh Service to which Doran refers in his letter. “I was very glad to hear of the success of the Welsh Service,” he writes. “ I hope it has been favourably reported in the papers,” and he shared his hope that it would increase the welcome of the Welsh Psalter.

Such was his work that, by the late 1880s, the impetus to re-establish a Welsh-speaking church had been revived, and a new church hall, Capel Dewi Sant, was opened in Howard Gardens in 1889.

A few years later, in 1891, a new Eglwys Dewi Sant was opened next door, the land for the hall and church given by Lord Tredegar.  The church was bombed in 1941 and services were transferred to the Church Hall. It wasn’t until 1954 that the redundant, modified and reopened St Andrew’s Church became the new (and present day) Eglwys Dewi Sant.

“I am not a teacher of languages, but a priest of God’s Church,” said Fr Jones to his friend Fr Charles Lowder, the founder of the Society of the Holy Cross. Lowder had visited Fr Jones when he was Vicar of Llanegryn before he had moved from there at the foot of Snowdonia to the docks at St Mary’s.  During his stay, Lowder attended a Welsh language service with his friend.

Afterwards he took the Welsh priest to task, suggesting he taught people English rather than hold Welsh services to which Fr Jones gave his curt response. “My duty is to teach the people religion in the language they understand,” retorted Fr Jones. “I could teach them the faith in their own language far easier than I could teach them a new language.”

“I need not say,” he later wrote, “I never heard another word about teaching English to my parishioners.” It was to this kind of attitude that he consistently responded.

As bright a service as can be

Fr Jones refused to believe, from his own experience and observation, that Welsh was a dying language. “In my belief there are more people speaking Welsh now than ever spoke Welsh at any previous period of our history,” he said in 1887 as he addressed the Llandaff Diocesan Conference. “The Welsh language … seems as unlikely to die as ever, and it is our duty to try and meet the difficulty we have to deal with: the providing services in both Welsh and English in many of our parishes.” He even called on a special fund to be established for providing additional clergymen to address the issue.

His concern too was that, where services were offered in both languages, more care and attention were generally given to the English ones. “As bright a service as can be provided is given,” he said.

“Let proper care and attention be paid to the Welsh services, and an honest teaching of the doctrines of the Church of Christ, and let the Welsh services be rendered with reverent care and earnestness.” His concern was that Welsh speakers were being short changed, given times of service which were inconvenient and not provided with the sacraments which, he said, “alone can meet the needs of fallen man, be he Welshman or of any other nationality. Other systems may amuse, and attract for a time, but then there is no going to the root of the matter in these modern systems.”

“You flatter the people, and get crowded congregations at harvest home services, but you do not strike the root of the evil with which we have to contend.”

“Up to the present we have been going on wrong lines; we have been giving our Welsh people services as like what they get in chapel as we can, and the result has been disappointing. Catholic teaching and practice as yet have not been tried amongst the Welsh.”

For Fr Jones, providing services and teaching in the Welsh language in such a dedicated and meticulous fashion was about providing the riches of the catholic church to all, in equal measure. The publication of the Welsh Gregorian Psalter, the subject of the letter in hand, was fed by this desire.

It won’t be given up!

The Gregorian Psalter in Welsh was being undertaken with Doran and a layman, Spenser Nottingham, who had served as Precentor of St Matthias, Church, Stoke Newington and honorary choirmaster at St Mary’s, Chiswick. Doran had served as a Missionary in India with the Church Mission Society, and by the time of correspondence with Fr Jones had already jointly published a Directory of Plainsong.

Fr Jones had a great love of music and a passion for plainsong which he gradually introduced to St Mary’s, despite great opposition.

Once, when he attended an elaborate service at some other church where the music was described as being “a florid kind” he said, “There was no music to do a fellow good; no plainsong.”

But the use of plainchant was not simply a personal preference.  For him it was a matter of principle, as most solemn and suitable to its purpose, and therefore to be continued and upheld even though it was not appreciated. “It won’t be given up while I am vicar!” he said.

He encountered many difficulties and obstacles in doing this but he faithfully continued and persistently laboured until St Mary’s Church was transformed from what had once been called “a preaching house” to a place where the beauty of catholic worship could be celebrated.

POSTSCRIPT: Below is the full text and photographs of the letter.  Please note that one or two words are indecipherable to me – indicated by “…..”

Feast of the dear Patron s. Gregory the Great, Pope and Confessor and Doctor transferred from yesterday, 1882

After the above elaborate dating, (not a usual style with me, but suggested by the labours that we have in hand,) let me begin.

There is no real inconsistency between iad iaith in 63:6 and gwyl iaith in 199.148, the former being one ending, the latter a mediation. In the same way you may have observed in the English testimonies as a mediation testimonies in the ending.

Let me hear about the other ……. cases as soon as you can.

You and Lewis seem agreed to render? Intimation by dechreuad of ending by/try terfyniad. L. objects to your canoliad for mediation, it being a word unknown to him of which he fails to find in the dictionary.

I was very glad to hear of the success of the Welsh Service. I hope it has been favourably reported in the papers, and may t…d yours an increasedly wide welcome for the Psalter

N…… s are certainly sometimes very tiresome to deal with. I should advise you in any future transaction that they may be troublesome to communicate with my colleague who, I doubt not, would gladly give these directions for you. His address is 30 Eastcheap E.C.

I expect Palmer here on Wednesday. I will discuss again with him how IV.4 S.R should be, and notify to you the result. S….. vary somewhat in different uses. What in one is indissoluble in ……. may not be.

I have sent L. a setting of Venite to a proper Venite Melody. If you and he approve it may be inserted in the Canticles. It might be perhaps with advantage set also to Pasclia nostrum.

I should indeed like to insert all the proper Venite melodies, which are indeed quite distinct from the ordinary Psalm-tones, but it would be a voluminous addition. We might perhaps hope to add them in a future edition, as I hope to do in the English Canticles.

I began this letter jocosely. I have occasion to end it solemnly and sadly. We have been some days very anxious about my mother in law, Mrs Goldin who has been very ill. Hitherto there have been helpful symptoms, but I have just heard that she is apparently succumbing, and it is not improbable that when this reaches you she will have passed away! I know you will remember her and your family in this trial. 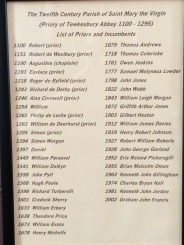 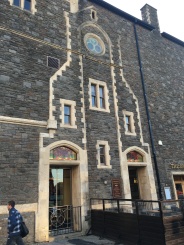 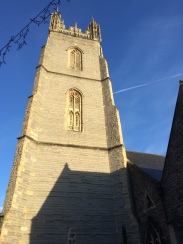 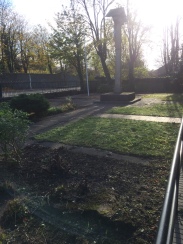 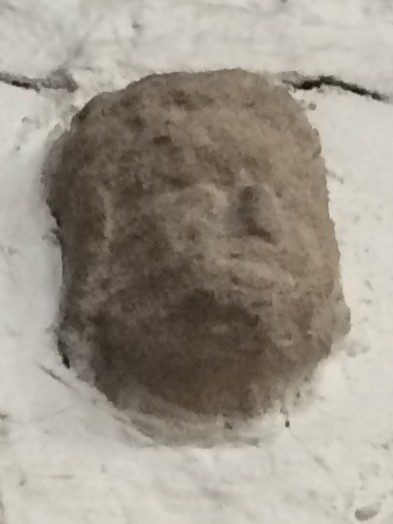 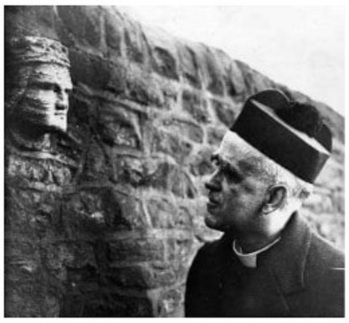 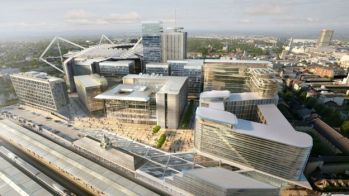