Our tenth article of faith is a small stone plaque in the north-west corner of St Mary’s Church in memory of ‘Henry James Thatcher’, a plaque which unfolds the story of a man of enthusiastic faith, committed friendship and an eye for precision!

We found it quite by accident, the grave of Henry James Thatcher. We were in Cathays Cemetery to clean the gravestone of Fr Griffith Arthur Jones in preparation for prayer on the anniversary of his death during the 175th anniversary of St Mary’s Church.

There, beyond his grave, was a fallen stone and, inscribed upon it, a name familiar to those of us who had read the biography of Fr Jones, or who had taken note of the plaques fixed to the walls of the church.

We knew Mr Thatcher to be a longstanding Churchwarden, thirty years in all, an office he held through difficult divisive years of reform in the parish in the late nineteenth century. We knew him, too, to be a friend of Fr Jones.

Likewise, the scant script of the memorial tablet in St Mary’s informed us that he was an Altar Server, Secretary to the Llandaff Diocesan Lay Readers Association and a member of the Cardiff Church Committee, whatever that meant.

But it’s time now, perhaps, to discover more about this man whose fallen grave stone marks the place of his rest, next to that of his dear friend and priest. 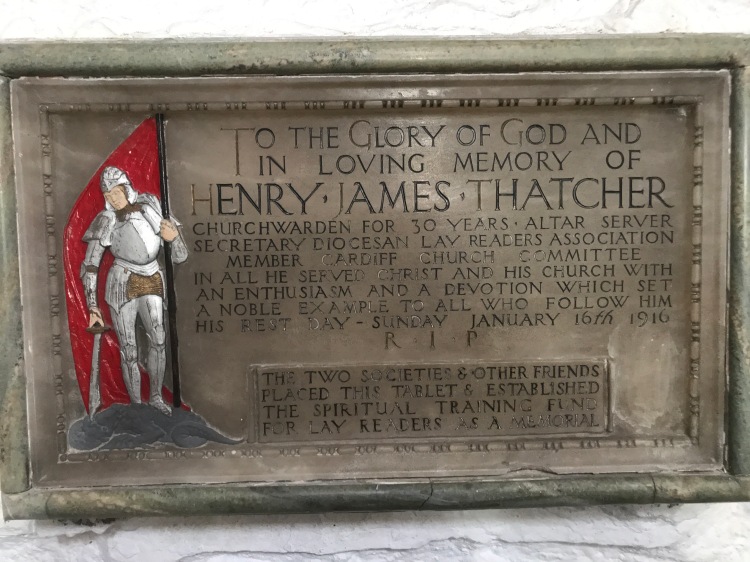 A friend of Father Jones

The first familiar words we have from Henry Thatcher are from the biography mentioned above, words he shared with another friend and churchwarden, Edwin Dobbins, written on behalf of the congregation of St Mary’s Jubilee Year and the 21st anniversary of Fr Jones’ Incumbency.

“We desire in presenting the address to express our great love and esteem for you, our admiration of your personal character, and our hearty appreciation of the services you have rendered to the Catholic Church especially in our parish. We trust you may be long spared under God’s blessing to be our Pastor, and assuring you of our continued love and duty.”

Fr Jones valued many close friendships, two of whom were those longstanding churchwardens, and for many years it was their custom to enjoy an annual outing together. “These little excursions were greatly enjoyed by all three, and much looked forward to by the churchwardens. They both appreciated the Vicar’s joyous spirits, and recognized how at the same time he was always anxious to say his Mass every Sunday when he was away on these holidays.”

Living as he did in 3, Glossop Terrace, just around the corner from Fr Jones’ retirement home in Longcross Street, Adamsdown, he was there right to the end of his friend’s life in this world, and “spent all his spare time in the sick room.”

He must have had a steady hand, an eye for detail, a mind acquainted with the scientific art of precision. From his “commodious premises” and “well-appointed shop” at 107, Bute Street, Thatcher measured time as a watchmaker and chronometer, and helped steer ships through stormy seas as ‘An adjuster of Iron Ships’ Compasses.”

A jeweller, too, there are several newspaper reports of burglaries and thefts from his shop. On one occasion, two young lads received a fourteen day prison sentence for stealing a couple of watches and trying to sell them in Neath! His craft extended, too, to making spectacles, an Optician’s trade up his sleeve, helping people to see a little clearer.

Perhaps then, with all this craft, he was well suited to life at St Mary’s, helping to steer things through a changing scene, riding the storm, having a clear vision.

In 1880, there were around 26 watchmakers and only 8 Chronometer Makers in Cardiff. The business run by Mr Thatcher then had actually been established in 1819 by Samuel Marks, with Thatcher trading a little higher up the street from a smaller premises since 1869.

Incidentally, Samuel Marks along with his brother, Mark, were sons of Michael Marks who was one of the first Jewish arrivals in Cardiff from Neath.  He established a premises first in Angel Street (now Westgate Street) and finally registered as Marks and Co at 11 Bute Road.  He became well known in the Docks. and signed a petition against the rival Barry Dock scheme.  He died at the age of 83, and it was to Samuel, Mark and Solomon Marks to whom the Marquess of Bute donated land at Highfield for a Jewish cemetery.  There is a memorial in the cemetery to Samuel in gratitude for his services to the Jewish Community.

Thatcher bought the business from Solomon Marks in 1876 and “conducted it with great ability and success, fully maintaining the high reputation it has so long enjoyed.”  In 1893, it was believed to be “the oldest of its kind in Cardiff . . . patronised by the Portuguese Government, and by a large and important nautical connection.” (The Ports of the Bristol Channel, Wales and the West, London Printing and Engraving Co. 1893)

His shop had “a large and valuable stock of chronometers, watches, clocks, opera and field glasses, marine glasses, compasses, and all manner of nautical instruments, charts, and stationery.”

He was described as “a thoroughly practical master of his scientific trade, and employs an efficient staff of skilled hands, all work being done on the premises under his own careful personal supervision.”

“Everything supplied at this establishment is of first-class quality, and besides selling his own reliable and approved chronometers, Mr. Thatcher is agent for all the principal chronometer-makers, so that any well-known make can be at once obtained through him.”

At some point he had also worked alongside his brother, the wonderfully named Cornelius Octavius Thatcher. The ‘Thatcher Brothers” Partnership was dissolved by them in October 1872, with Cornelius continuing to work as a ‘Music and Musical Instrument Seller’ and as a ‘Teacher of Music’ trading from 4, Montgomery Terrace, Roath.

For someone like me who, at 16 years old, received a School Report comment from his Biology teacher that he “tends to be over opinionated at times,” I rather like the reports of Mr Thatcher.

“Every character has the defects of its qualities,” wrote Canon Beck (Vicar of Roath and Rural Dean) in an obituary of Thatcher after his death in January 16, 1916. “A critic can easily find occasions when zeal outruns discretion. And quite certainly Mr. Thatcher’s utterances were not always as balanced as might have been.”

“Still, for me,” continued Beck, “all defects were obliterated by that supreme gift: enthusiasm. It is surely a gift which Churchmen specially need to-day.”

We can only wonder how many children and young people he enthused as a long standing Superintendent of the Sunday School at St Michael’s, a Mission church of St Mary’s at Mount Stuart Square. In 1907, the Bible Classes treated him and his assistant Superintendent (Mr E.W. Edwards) to a complimentary dinner to thank them for their work They responded to their gratitude and generosity in a thank you speech when they “expressed their pleasure they felt in meeting so many Docks boys.”

“For most parishes at the moment do not require a series of quiet days nearly as much as a series of religious earthquakes. We have to make the present generation realise that Christianity is after all a most splendid adventure, and that the Christian religion can bring into men’s lives the highest satisfaction and joy,” wrote Canon Beck.

“And I’m sure that we never accomplish this, till we have caught something of that flame of enthusiasm which was the marked feature the character him whom many of us will never forget.”

Once, when Dean Vaughan’s “refined sensitiveness had been shocked by some excited speech” of Thatcher, he remarked .“What a sweet voice Mr. Thatcher has!”

“The political world of the city knew something of his ardour and energy, he was a keen educationalist, and a regular attendant at the meetings of the Church Schools Grouped Committee,” wrote Canon Beck.

A chairman of Adamsdown Conservative Club, Thatcher was also a Councillor and, in one of the anti-church newspaper reports, he is doubly described as “The Ritualist and Tory Candidate.”

“But behind and beneath all these other interests was his consuming interest in things directly spiritual and religious,” said Beck. “And I should say without any hesitation that his most effective work was done as churchwarden at St. Mary’s and Secretary from their foundation, I think, of the Llandaff Lay Readers’ Association and the Cardiff Church Committee.”

“He was an exceptionally good reader of the lessons in church,” his obituary reads, “and many a cleric might have learned much from him in this. It would be no easy task to enumerate the meetings he has addressed or the demonstrations he has organised.!

When he died, a fund for the Spiritual Training of Lay Readers was established by his friends and colleagues.

Thatcher served as Honorary Local Secretary of the Waifs and Strays Society (which eventually became, many years later, The Children’ Society and which, in 1900, had over 2,800 children under its care.

As a member of the ‘Cottage Homes Committee’ he was caught up in the charge of Proselytism, when certain young people living in the Taff Embankment (Church of England) Houses and who had been attending St Paul’s Sunday school in Grangetown were now, so it seemed, attending one of the Mission church of St Mary’s.

In the course of the newspaper report, Thatcher said he was in favour of St Mary’s Mission room upon the ground that the children lived in the parish, and insisted they be sent to the National rather than the Board School. Although defeated by vote, Thatcher we are told “did not yield from the stand he had taken.”

Members objected to him “introducing questions of creed and denominational teaching” but Thatcher was a strong advocate of the National Schools – run by the church and where religion could be freely taught – rather than the Board Schools, and he was able to contribute to this as a member of the Cardiff Church Committee.

As a member of the ‘Cardiff Workhouse Visiting Committee,’ a group which both highlighted conditions in the workhouse and showed care and compassion for the wellbeing of its “inmates.” During one meeting to plan for the Christmas celebrations, he stood firm, and insisted that, amongst all the fare of the table, beer should also be offered! The motion was passed, as was another to provide lemonade too!

Henry Thatcher married Clara, the daughter of Cardiff Shipbuilder, Thomas W.H. Plain who traded under the company name of Davis and Plain. Plain lived at 30 Park Place where he also died at the age of 80 years on 12 January 1908. Born in Pembrokeshire, Plain moved to Cardiff at around 20 years old, starting in business in the ship repairing trade but eventually became a shipowner, specialising in Channel Cutters – rigged small sailing craft which doubled up as both fishing and pilot boats.

A Conservative in politics and a staunch Churchman, for more than two decades he was a member and chairman of the Cardiff Board of Guardians which administered the Poor Law,

Yet after 20 years “he was rejected by the electorate. There was no reason for this, no good cause, but the excuse given was that he was too just in the matter of giving relief. He believed in investigating every case thoroughly,” reported the Cardiff Times, 18 January 1908

It is touching, perhaps, that the grave of Henry James Thatcher sits so close to that of his friend, and somewhat sad to see the stone cross lying broken on its back, stitched almost into the grass.

He had been of immense benefit to the transformations brought by Fr Jones, and is a reminder to us of how important friendship is, especially in the service of the gospel – and, in that service, to have something of the enthusiasm exhibited by Mr Thatcher!